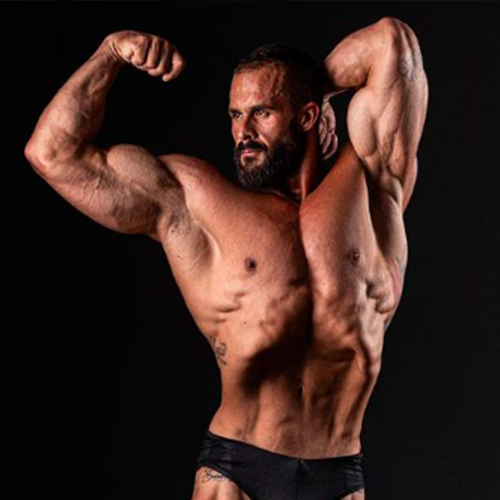 Petar Duper was born in Dubrovnik in Croatia on 19-08-1987.
Italian mother and Croatian father.
He lives and grows between Auronzo di Cadore (Dolomites), the place from which his mother is original, and Padua, where he studied.

Since childhood he has been practicing sports, initially with judo and then coming to semi-professional water polo.

Once he graduated he moved to Treviso to work in the hospital in the psychiatric department as a psychologist. In the meantime he became passionate about fitness and started a collaboration with the trainer Rossano Basso. After a short time Petar begins to win the first competitions until winning second place at Mr Wabba universe in the category man physique.

At the age of 25, preparing for the World Wabba, he is hospitalized for fulminating meningitis, he risked losing his life. After a year of serious physical problems he recovered and decided to return to compete, he returned to the podium of Mr Universe in the category bodybuilding tall and at the same time he established himself as an athletic trainer, psychologist and teacher Acsi Coni (the youngest teacher in Italy).

At the age of 29, Petar became the father of a beautiful child, Edoardo Valentino Duper. With the birth of his child, he decides to open a psychological and athletic preparations study and in Treviso and to stop competing.

When his son was 5 months, Petar recovered from a serious emotional crisis by self-centred psychological techniques learned in a training course in Croatia.

Shortly after that, he decided to return to compete, first in Ifbb as heavyweight and then in December 2017 he won Mr Wabba universe prepared by Emanuele Zanetti in the bodybuilding tall category.

At the suggestion of his new trainer, Giuseppe Romano, he decides to compete as Classic Physique and to get involved by making the international Pro League Competition in Bari, The Galaxy Pro.

The preparation is carried out in a very personalized way combining the multiple knowledge of its new trainer and the genetic testing methodology (vitae DNA) on the percentages of assimilation of individual foods, operating method on which Petar was already a professional and technique studied together with the surgeon Giovanni Forlini.

In his first competition with Romano Petar won his category and as Classic Physique and then the absolute becoming professional Ifbb. Almost for fun, he decided, on the same day, to try to compete against the professionals, even though he knew the very high level. With great astonishment, he wins and finds himself in just two days of competitions to realize his dream, take part in Mr Olympia.

Great enthusiasm, joy and emotion for Petar and his coach Giuseppe Romano who in 48 hours have seen their life change.

Petar is the first Italian after 24 years to come back to Mr Olympia and this in addition to being an immense honour is also a great responsibility that will motivate him every day more to improve his condition.